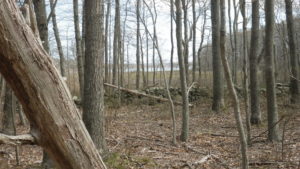 Reservations and Wompesu
During the 18th century, reservation life was extremely harsh. The State abolished the position of the Sachem, the traditional tribal leader, and took over the affairs of the Tribe with a five-man council in 1792. However, tribal members continued to recognize the Sachems and traditional leadership.
Due to the increase in number of colonists, the Narragansett hunting and farming grounds were greatly depleted. Colonists also introduced the common hog to the area. These domesticated hogs would roar along the coast and dig up the clam beds, a traditional food source for the Indians.

The Tribe was under great pressure to abandon the traditional ways and adopt Waumpeshau (white man) ideas of civilization. As a result of dealing with the Waumpeshau, many debts were incurred which were paid off by land grants. By the end of the 18th century, the reservation area had been reduced to 15,000 acres. In 1790, the U.S. Congress introduced and passed the Non-Intercourse Act, which prohibited the taking of Indian lands as payment for debts incurred. However, the intention of the Act was ignored in the 19th century when the State of Rhode Island unilaterally attempted to relieve itself of the responsibilities of trustee to the Narragansett People.

Illegal Detribalization
Although Narragansett leaders resisted attempts by outsiders to take the remaining 15,000 acres of reservation lands, the State of Rhode Island illegally “detribalized” the Narragansett Tribe without federal sanction during the period of 1880-1884. After “detribalization,” the Tribe continued to maintain its traditional government and recognized Sachems, Medicine Men and Women, the Tribal Council, Sub-Chiefs, Tribal Prophets, the War Chief, and Clan Mothers.

Monthly meetings were held despite the population’s dispersion into towns surrounding the old reservation. Some members who were able to purchase land remained in the reservation area. The annual gathering meeting, 2nd weekend in August, continued to be held each and every year.
In 1935, Senator Theodore Frances Greene recognized this gathering and proclaimed the second Saturday of August as Rhode Island Indian Day; the annual ceremony continues to this day and marks the Tribe’s 336th year in succession.

Perseverance
Many petitions of rebuke were written by tribal leaders protesting State actions, but to no avail. The Tribal Council continued to function, and tribal meetings and elections were conducted between 1889 and 1901. The Tribe raised funds from its members, compiled a roll and hired an attorney to pursue its land claims. The State Assembly investigated but rejected a claim for the Rhode Island shoreline in 1884. In 1898, the State Supreme Court heard and rejected another land claim. After 1901, there continued to be several leaders who were recognized both by the community and by outsiders as Narragansett tribal leaders.

The Narragansett Tribe of Indians was incorporated in December 1934. The public once again recognized the offices of the Chief Sachem, Medicine Man, a nine-member Council, and Scribe and the office of Prophet were re-established. Members of the Tribe also began a Native American magazine called, “The Narragansett Dawn”. The magazine was “published monthly in the interest of The Narragansett Tribe of Indians”. The magazine ran for approximately three years and copies can be found at the Smithsonian Museum and the Rhode Island Historic Preservation Society. 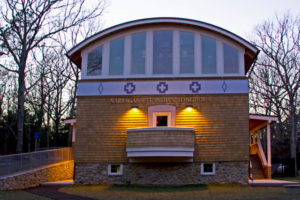 The Longhouse
The Longhouse was built in the early 1940’s to provide a convenient meeting place for Tribal members. Prior Tribal Council and Tribal Body meetings were held at the Narragansett Indian Meeting House (Church) and the local Charlestown tribal homes of the governing body. The Narragansett Indian Longhouse became the center of Tribal activities. The three acres of land on which the Indian Church is located is the only original parcel of tribal land that has never been out of the possession of the Narragansett Tribe.

Reclaiming the Land
In 1975, the Tribe filed a land claim suit against the State of Rhode Island and several landowners for the return of approximately 3,200 acres of undeveloped reservation lands. The suit was eventually concluded in an out-of-court settlement in 1978 of approximately 1,800 acres. Under state law, the Narragansett Indian Land Management Corporation was created for the purpose of “acquiring, managing and purchasing real property” as provided in the land claim settlement. The corporation was to hold title to the land claim settlement until the Narragansett Indian Tribe was officially reinstated as a federally recognized and acknowledged Indian Tribe.

Federal Recognition
In 1978, with the support of the Native American Rights Fund, a tribal genealogist was elected to compile data for a federal status petition. A fifteen-volume petition for federal recognition was submitted to the Department of the Interior, Bureau of Indian Affairs in 1979.
The Narragansett Indian Tribe received federal recognition and acknowledgement on April 11, 1983. State legislation, which transferred title to the Tribe, was enacted in 1985. The Tribe then initiated procedures in 1985 to obtain federal trust status for the settlement land. The land was placed in provisional trust, subject to a completed, tribal-approved cadastral survey. 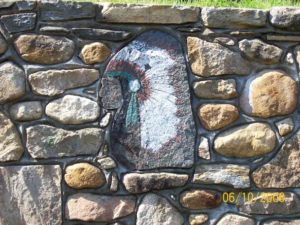 The Narragansett Tribe Today
The Narragansett People have seen many changes in their lands; however, their traditional culture has been passed down from generation to generation and is even stronger today. Narragansett Indian men and women have fought with honor in every war starting with the United States revolution. Tribal members have careers in every profession including; doctors, lawyers, teachers, artists, as well as fisherman, lobsterman, cooks, and masons.

The Tribe has greatly expanded its administrative capability. Policies and procedures have been implemented to protect and preserve its land, water and cultural resources and promote the welfare of Tribal members. The education, family circle, traditional ceremonies, and Narragansett language are important aspects of the Narragansett Indian Tribe’s culture and daily lives. Tribal monthly meetings and other special, traditional gatherings take place at the Four Winds Community Center, on Route 2 in Charlestown, RI.

Nationhood
Since April 1983, The Narragansett Indian Tribe, a Sovereign Nation, is a Federally Recognized Tribe of the Federal Government. The Tribe has been involved with Federally Funded Programs, which include the Bureau of Indian Affairs and the Department of Indian Health Services. Through the Federally funded programs the tribe is able to service many of its Tribal Body members in all aspects of life. The mission of the Tribe is to continue to promote and develop awareness among Tribal members the importance of education, culture, and family life within their own tribal community. Quality job opportunities are being established and members are seeking out educational opportunities to enhance their individual careers.

Tribal Genealogy
Membership in the Narragansett Indian Tribe is verified by tracing a person’s genealogy to the 1880-1884 Roll, which was established when Rhode Island illegally “detribalized;” the Narragansett Tribe and to be known in the community. Presently, the Tribal Rolls are closed. The current population stands at approximately 2400 members. The majority of Tribal members live in Rhode Island, but members also live in other states and countries.