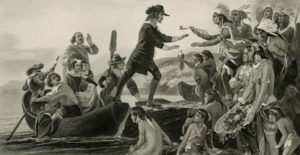 Historical Perspective of the Narragansett Indian Tribe
The Narragansett Indians are the descendants of the aboriginal people of the State of Rhode Island. Archaeological evidence and the oral history of the Narragansett People establish their existence in this region more than 30,000 years ago. This history transcends all written documentaries and is present upon the faces of rock formations and through oral history. The first documented contact with the Indians of Rhode Island took place in 1524 when Giovanni de Verrazano visited Narragansett Bay and described a large Indian population, living by agriculture and hunting, and organized under powerful “kings.”

The Tribe and its members were considered warriors within the region. The Narragansett customarily offered protection to smaller tribes in the area. Certain Nipmuck bands, the Niantics, Wampanoag, and Manisseans all paid tribute to the Narragansett tribe. These tribes all resided in areas of Rhode Island at the time of the first European settlement around 1635. In 1636, Roger Williams acquired land use rights to Providence from the Narragansett Sachems. The colonists quickly came into contact with both the Narragansett and Niantic Sachems.

Historically, tribal members had two homes; a winter home and a summer home.  The winter home would be called a long house in which up to 20 families would live in over the cold winter months. During the summer, the tribe would move to the shore and construct Wigwams or Wetus, temporary shelter made of bark on the outside and woven mats on the inside. They would dig out large canoes from trees which could hold up to forty men.

Following the massacre, many of the remaining Narragansett retreated deep into the forest and swamp lands in the southern area of the State. (Much of this area now makes up today’s Reservation).

Many who refused to be subjected to the authority of the United Colonies left the area or were hunted down and killed. Some were sold into slavery in the Caribbean, others migrated to upstate New York and many went to Brotherton, Wisconsin.